He died at a hospital in western France where he had been admitted over the weekend for cardiac problems, officials said.

As a novelist, Mr. Robbe-Grillet helped establish the New Novel, a genre that rejected conventional storytelling. As a screenwriter, he was best known for his work on Alain Resnais’s “Last Year at Marienbad” (1961), for which he was nominated for an Academy Award.

An enigmatic work whose characters, often bored and identified only by initials, live in an otherworldly chateau, not sure whether they are planning seductions or remembering them, “Last Year in Marienbad” was released in the United States in early 1962 and became one of the most talked-about art films of the year.

He was the most prominent of France’s so-called New Novelists, a group that emerged in the mid-1950s whose other members included Claude Simon, Michel Butor and Nathalie Sarraute. Their experimental work tossed aside literary conventions like plot and character development, narrative and chronology, chapters and punctuation.

Mr. Robbe-Grillet’s best-known works of fiction include “Les Gommes” (“The Erasers”), a 1953 novel about a detective investigating an apparent murder who ends up killing the victim, and “Le Voyeur” (1955), about the world seen through the eyes of a sadistic killer. His last novel, published last year, was “Un Roman Sentimental” (“A Sentimental Novel”).

In 1963 he wrote “Pour un Nouveau Roman” (“Toward a New Novel”), a highly regarded critical essay laying the theoretical foundations of the genre. It became the French avant-garde’s bible and catapulted Mr. Robbe-Grillet to star status among Parisian intellectuals.

Mr. Robbe-Grillet was born in Brest, France, the son of an engineer. He graduated from the Lycée St.-Louis in Paris and received a degree in agricultural engineering from the National Agronomy Institute.

Information about survivors was not immediately available.

Mr. Robbe-Grillet was inducted into France’s Legion of Honor and was one of the 40 so-called immortals of the prestigious Académie Française, the anointed protector of the French language.

President Nicolas Sarkozy’s office said in a statement, “The Académie Française today loses one of its most illustrious members, and without a doubt its most rebellious.”
http://www.nytimes.com/2008/02/19/books/19robbe-grillet.html 遠い昔、或る女の子を『去年マリエンバートで』に誘ったことが失恋に繋がったということがあったなということを思い出した。 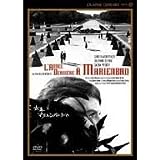