Lenny Henry*2 “Lenny Henry on Prince: 'I almost passed out. This was my hero talking to me'” http://www.theguardian.com/music/2016/apr/24/the-time-i-sang-with-prince-and-kate-bush-by-lenny-henry

I met him a couple of times. Once at the Kensington Roof Gardens, at an after party. This was circa Diamonds and Pearls. There was a huge contingent of celebs, rockers, rollers and ne’er-do-wells in the crowd. Prince and the band appear and immediately we noticed Eric Clapton playing a long, funky solo. Prince was moving from side to side in a synchronised Temptations-style dance thang with the band.

Eric’s solo over, Prince grabbed the mic, and blew the room away.

After the set, Prince walked down and drew level with me, (with my right nipple actually – he was short) “You’re Lenny, right,” he said. I almost passed out. This was my hero, talking to ME. Lenny. それから、チャカ・カーンの誕生パーティで殿下に会ったという話が出てくるのだが、その後にケイト・ブッシュの”Why Should I Love You?”にバック・ヴォーカルで参加したときの話；

(…) Kate Bush (another hero of mine) asked me to sing on Why Should I Love You?, a track for her new album The Red Shoes. She sent me a tape and I dutifully learnt my parts. When I arrived at the studio, I said: “It’s really weird but the guitar on this sounds so much like Prince – was that what you were going for?”

Kate said: “It sounds like Prince because it IS him. Do you wanna go in the booth?” I sang my heart out. I couldn’t believe it. I was performing on a song with two of my heroes. 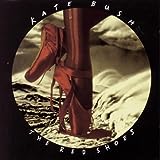