Keyboardist Joe Zawinul, whose innovative playing and composing influenced musical genres reaching from soul jazz and avant-garde to fusion and world music, died early Tuesday in Vienna. He was 75.

According to the Associated Press, his death was confirmed by a spokesperson for Vienna's Wilhelmina Clinic, where he had been hospitalized since August.

Zawinul's manager, Risa Zincke, told the Austria Press that he suffered from a rare form of skin cancer.

A native of Vienna where he played accordion as a boy, Zawinul arrived at the Berklee College of Music in Boston in 1959.

But he quickly left school and gigged with Maynard Ferguson and Dinah Washington before joining the quintet of alto saxophonist Julian "Cannonball" Adderley in 1961.

His groove-driven piece, "Mercy, Mercy, Mercy," with its surprisingly authentic -- for a European musician -- connection with American blues and gospel music, was one of the significant compositions of the then-popular soul-jazz style and was a hit for Adderley.

Switching into a different mode, he was a vital participant in Miles Davis' transition into electric jazz, writing the title song for "In A Silent Way" and performing on "Bitches Brew," albums that opened the door to combinations of jazz, rock and electronica that would follow.

From 1970 to 1985, Zawinul co-led the groundbreaking ensemble, Weather Report, with saxophonist/composer Wayne Shorter. Viewed by many as the band that defined jazz fusion, it was universally praised as a creative breakthrough, the character of its sound driven by Zawinul's synthesizers.

"The synthesizer was not a toy in Joe's hands," Shorter said Tuesday. "He even practiced how to touch the keys on a synthesizer. He'd say, 'You touch them differently than you touch an acoustic piano. People approach it like it's going to do something. You have to play it like it's not going to do anything; you have to do everything.' "

Weather Report's effects were felt across genres, triggering the arrival of a succession of jazz fusion ensembles, as well as jazz-oriented pop groups.

Despite its popularity, however, and largely because of the presence of its two leaders, the band retained the respect of the most critical jazz observers.

Reviewing the Playboy Jazz Festival in 1982, Leonard Feather wrote in The Times, "Weather Report is less a collective of five men than a single instrument with 10 magisterial hands; a soaring sonic spaceship controlled by two far-from-automatic pilots, Zawinul and Wayne Shorter."

According to Shorter, however, the group was initially formed with far different goals in mind. "When we got together," Shorter said, "we spent very little time describing what we wanted to do. In the beginning, we mostly talked about music as literature. Almost compared like to James Joyce -- sentences without periods or commas, without capital letters, or maybe with all capital letters.

"The musical changes that took place emerged along the way. Instead of saying, 'Let's do this,' and then planning to take it someplace else the next night, we just worked on a musical dialogue. We knew that sending out what we were trying to do, and having it be received, wasn't going to take place overnight."

Nevertheless, Zawinul's "Birdland," released on Weather Report's 1977 album, "Heavy Weather," was a significant jazz hit, garnering Grammy awards for the original version, as well as cover versions by Quincy Jones and one with lyrics by Manhattan Transfer.

The band broke up in 1986, and over the last 20 years of his life, Zawinul's musical activities largely centered on his sextet, the Zawinul Syndicate.

Mixing rhythms from every part of the world with his own complex of synthesizer sounds, he would sit behind his keyboards like an alchemist, tossing musical phrases back and forth to musicians from across the globe.

"I'm a traveler and a listener," Zawinul told Bill Kohlhaase in the L.A. Weekly in 2000. "I'm into the folklore of music, but I've never taken a single bar from another culture. The music [of the Zawinul Syndicate] is just the feeling I have for it. It's what I have in my stomach."

Zawinul also composed and performed in other contexts. A recording of his "Stories of the Danube," a seven-movement work for orchestra, incorporating several of his well-known themes, was released on Philips in 1996.

And in 1998, he appeared as a soloist on the site of the World War II German concentration camp in Mauthausen, Austria, drawing a crowd of 10,000.

Zawinul's illness apparently had already progressed in July when his wife, Maxine, who was the first African American Playboy bunny, died. Shorter recalled seeing him around that time and asking about his health.

"The only thing that he said to me," he recalled, "was something really quick: 'I've got this cancer, man.' He just kind of tossed it off. Not that he was in denial. It was more like he was talking about a nuisance. That was Joe."

In August, Shorter, finishing a European tour, visited Zawinul at a concert in Hungary. Although they had spoken several times about a Weather Report reunion, it had never actually taken place.

"As we drove in from the airport," said Shorter, "his son said that this could be the last time Joe and I would play together. When we got to the concert, I went on stage near the end of his program. Joe and I did the introduction to 'In A Silent Way,' which is the part that his wife, Maxine, liked. When we played together, it was very concise and to the point -- very eye to eye, that kind of thing. When we finished they got a wheelchair, and that was the first time, and the last time, I saw him in a wheelchair."

Zawinul lived in Malibu and Vienna, where he started his own club, Birdland. He is survived by three sons, Anthony, Erich and Ivan, and several grandchildren.

Although no funeral plans have been announced, Vienna Mayor Michael Haeupl said Zawinul would be buried in a place of honor in Vienna.
http://www.latimes.com/news/obituaries/la-me-zawinul12sep12,1,7983008.story?track=rss http://d.hatena.ne.jp/sarutora/20070911/p1で採り上げられている8:30は手許になく、仕事も一段落したので、唯一手許にあるウェザー・リポートのディスクBlack Marketをこれから聴いて、彼を偲ぶ。 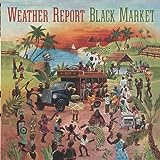