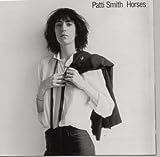 Laura Barton “Patti Smith: punk's poet laureate heads back on the road for her sins” http://www.theguardian.com/music/2015/apr/17/patti-smiths-horses-the-making-of-the-worlds-punk-poet-laureate

In 1975, with the opening line of her debut album Horses, Patti Smith set out her stall: “Jesus died for somebody’s sins,” she drawled, “but not mine.” It was a visceral, shocking, uncompromising and quite unprecedented introduction to an artist – as Michael Stipe of REM once recalled: “It tore my limbs off and put them back on in a whole new order.”

It was Horses that positioned Smith – as “punk’s poet laureate”, but also established her as an artist who believed she was serving something greater than herself. That opening line serves not just a radical rejection of religion, or a controversial embrace of sin, but as a refusal to ever be the main point of focus. “She belonged to a time,” says the music writer Richard Williams*2, “but she didn’t belong to a movement. She existed slightly to one side.”

It was a scene*3 that Williams recalls as “very interesting – more than anything that was going on in London at the time. It was very stripped down, it didn’t privilege or respect virtuosity as the progressive rock scene did, and which I found very sterile. And there was much more poetry to it. In the way that Lou Reed had been a poet. It was a kind of poetry that was different from Tales of Topographic Oceans, that was not about English whimsy, but that was something hard-edged and strong. It was dirty. In a way that beat poetry was dirty.”

Smith was a poet before she was a rock’n’roll star. In the early 1970s she was a member of the St Mark’s Poetry Project*5, which she described in her memoir Just Kids as “a desirable forum for even the most accomplished poets. Everyone from Robert Creeley*6 to Allen Ginsberg to Ted Berrigan*7 had read there. If I was ever going to perform my poems, this was the place to do it.”

For her first performance she enlisted the accompaniment of her friend Lenny Kaye to play guitar while she read. “My goal was not simply to do well, or hold my own. It was to make a mark at St Mark’s,” she wrote. “I did it for poetry. I did it for Rimbaud … I wanted to infuse the written word with the immediacy and frontal attack of rock and roll.” She read her poem Oath: “Christ died for somebody’s sins but not mine,” it begins.

Anne Waldman*8 was the host of that night at St Mark’s, and today is Smith’s neighbour, close friend and collaborator. “I’ve watched her grow and magnetise several generations since her first kinetic reading,” she says from her home in New York’s Greenwich Village. “She has continued to blaze across the planet with her extraordinary shamanic performances, with their searing lyric power and commitment to a saner environment for all the denizens who live in a very dark time. I am blessed to call her a cohort and friend in this crazy, complicated, beautiful, endangered reality. I love her. We shared a friendship with our dear Allen Ginsberg who adored her. She transmutes the darkness. She believes in redemption.” Horses, Waldman says, changed the frequency of rock’n’roll forever. アルバムHorses、とりわけゼムのカヴァー曲”Gloria”*9因みに、ゼムのリード・ヴォーカルはヴァン・モリソン。))を巡って；

Recorded at Electric Lady studios with contributions from Tom Verlaine of Television and Allen Lanier of Blue Öyster Cult, as well as Lenny Kaye, it was produced by John Cale of the Velvet Underground. (“She chose the right producer,” says Williams, “she knew he wouldn’t smooth away the rough edges and it gave them an explicit link to the Velvets.”)

It drew on rock’n’roll, reggae, jazz, the work of Arthur Rimbaud and Chris Kenner’s Land of a Thousand Dances – as well as, for that opening track, a cover of the garage-rock song Gloria by Them, but with the lyrics rewritten and overlaid with her poem Oath.

“People forget that Gloria was a Them B-side,” says Williams, “that it was the other side of Baby Please Don’t Go. You had to discover Gloria, you had to find it for yourself and work out what it meant. And so there was a sort of club of people who had found it.

“Patti’s version was conspicuously brilliant – she had found a way of taking it further, taking it to another realm. Who else used words with that kind of freedom and spontaneity?”

In Smith’s hands, Gloria became something quite remarkable, incantatory, mesmeric, it married that early performance poem with the vigor of garage rock. ロバート・メイプルソープによるジャケット写真；

It was also the cover of Horses that established Smith’s memorable style. “I think it was the way it presented women,” says Williams. “It was a new way of looking, a new way of seeing that people didn’t know how to express until then. It opened a door for people who were looking for a door, though they didn’t know what it looked like they knew they would recognise it when they saw it.”

She has described the album, with its portrait by Mapplethorpe, as “my aural sword sheathed with Robert’s image”. She chose her outfit carefully: a shirt she bought at the Salvation Army on the Bowery; the monogram on the breast pocket reminded her of a Brassai shot of Jean Genet. She wore it with her black jacket, a horse pin that Allen Lanier had given to her and her favourite ribbon.

“She says she was thinking of Charles Beaudelaire when she posed for the Horses cover,” says the fashion historian Cally Blackman*10. “She does look like a dandy in the photo – I think it’s the way the jacket is slung over her shoulder – and of course she looks like a boy or a man, so perhaps she is also continuing in the well-established tradition since the late 17th century of women who appropriate male dress for whatever reason, to express sexuality or the attempt to reform dress as stage costume, or merely for comfort.”

Mapplethorpe took the photograph at his lover Sam Wagstaff’s apartment, using natural light. When Mapplethorpe asked her to show more of her shirt, Smith threw her jacket over her shoulder, a deliberate channeling, she felt, of Sinatra. “I was full of references,” she wrote in Just Kids. “He was full of light and shadow.”

Again Smith refuses even to let that cover portrait be solely about her – instead insisting she share the gaze with Mapplethorpe: “When I look at it now, I never see me. I see us.” 馬齢を重ねるという言い方はネガティヴな意味しかないのだった。自虐的な一人称。

*3:“the downtown Manhattan scene that circled around Max’s Kansas City and CBGB and included Television, the Ramones and Blondie”